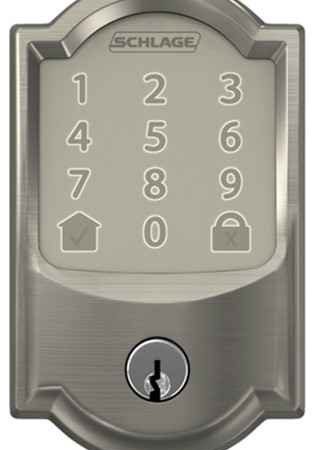 Keypad locks are a specific type of lock that operate somewhat differently from “traditional” ones. Here are some facts you may not have known about them.

Keypad locks work by requiring a user to enter a numerical code on a designated keypad to unlock the deadbolt or lock. Entering the correct code generates a small electrical current to unlock the mechanism. A keypad lock can be its own unit, or part of a larger access control system. Some even have an additional security feature that will lock the mechanism for 10 to 15 minutes after several unsuccessful attempts to enter the code. The benefit of this is you will not need to have a physical key with you; you will just have to remember the code. If you use the keypad often, you will likely find that you can memorize the code fairly quickly. You can easily set the code to be a number you can remember easily (but hopefully, no one else will be able to guess), such as the year a favorite movie or song was released.

The type of keypad varies widely so it will be easy to find one to suit your needs and budget, if you decide to install this type of lock. Some keypads have a few buttons labeled with numbers and/or letters while others have 12 buttons like most telephones. This type of lock does not have pins or cylinders like traditional locks and as a result cannot be picked. Their absence of hardware also makes them last longer. Additionally, a key lock can allow you to give someone a code they can use temporarily to access a site, then change the code once the access is no longer needed, eliminating the risk of a lost or stolen key. Key locks can easily be integrated into an access control system, which allows restriction of entry permission during certain hours or to certain parts of a building or complex even if a user has a correct code. They can also be installed on any type of door, as there are mechanical and battery-powered options which do not require connection to a power source.

Having some power source available is necessary to the proper functioning of a keypad lock. Individual locks can often be battery powered, (although the batteries will need to be changed periodically), while locks that are part of an integrated system can often draw power from the system, using a battery mechanism as a backup. One thing to keep in mind about this type of lock mechanism is that it tends to be more expensive than a conventional one, generally costing at least $115 to install and sometimes upwards of $500 for a very advanced one, compared to about $20 for a standard deadbolt. However, to many people, the increased security of a keypad lock makes this a worthwhile investment.

Keypad locks are different from conventional locks in many ways. The increased security of this option has made them an increasingly popular choice in recent years.

High Security Locks – Are they worth the $$?

Can a locksmith make a key from a lock

What Are the Safest Lock?

Is Schlage or Kwikset Better?

What’s keypad? should you own one?